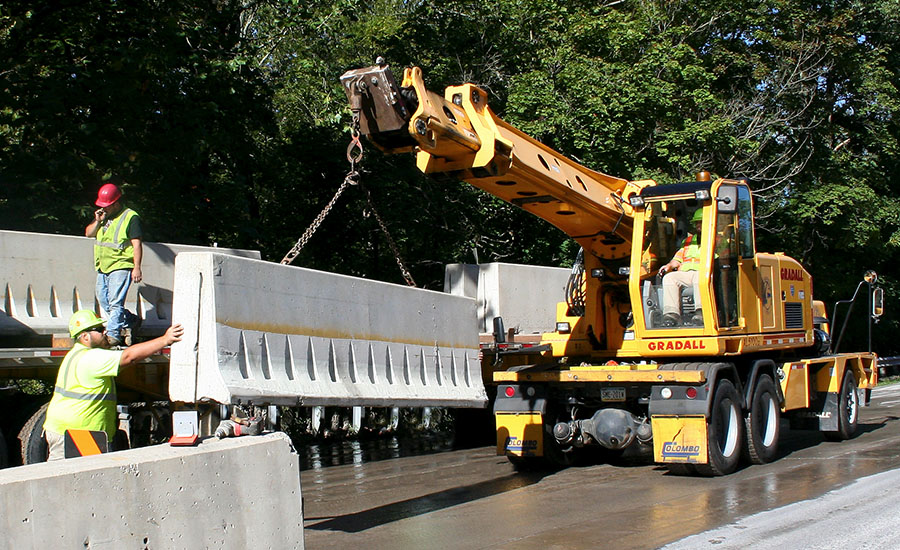 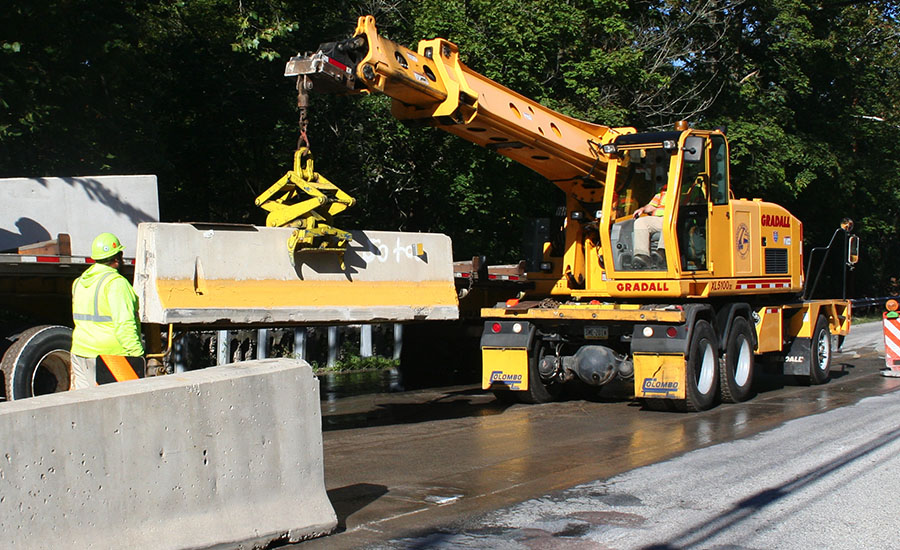 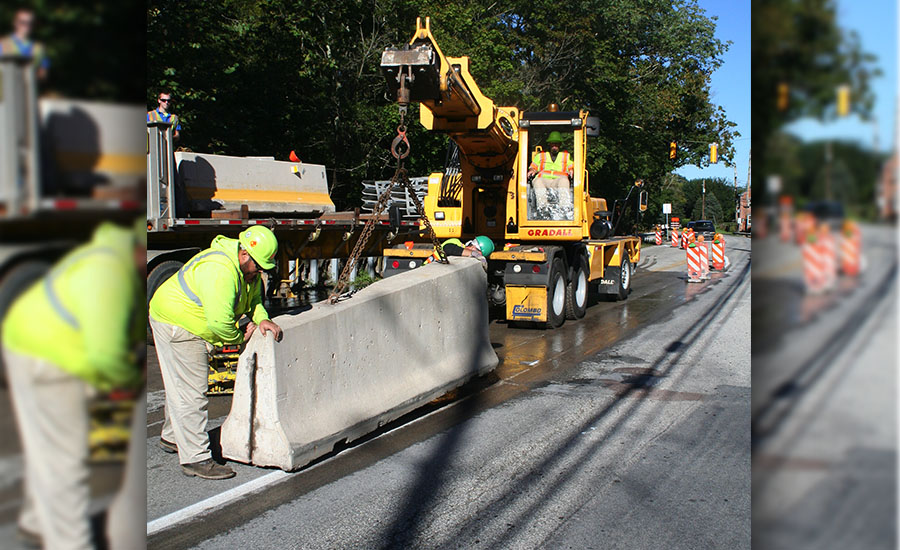 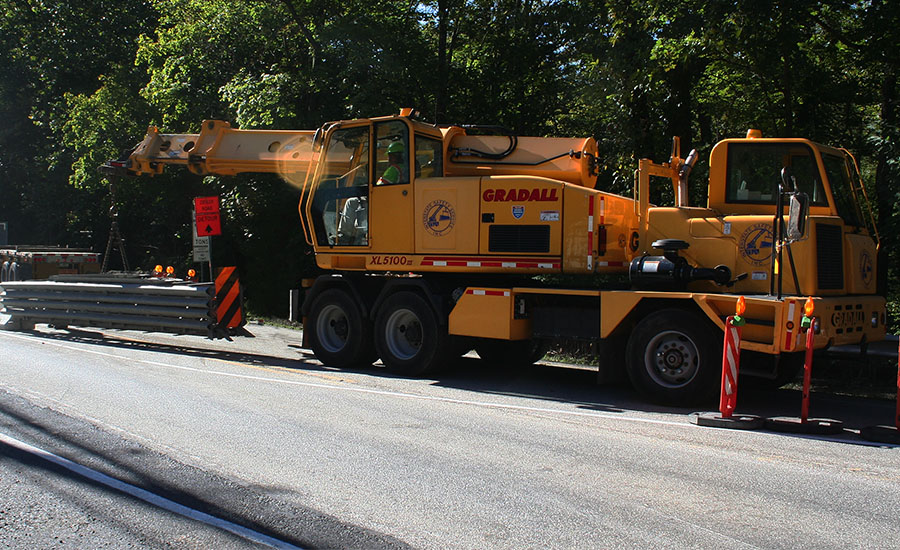 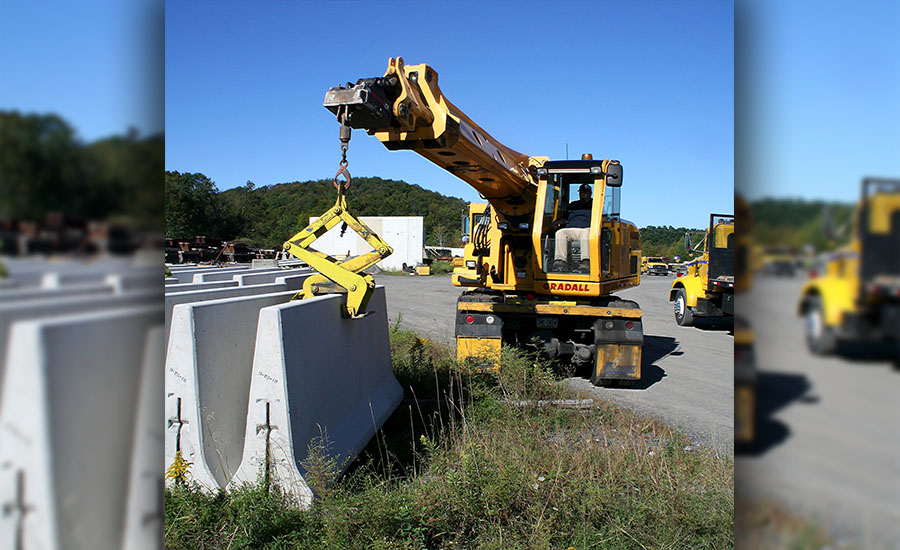 The success of Interstate Safety Service Inc. relies heavily on its ability to efficiently load, unload and place concrete highway barriers - often called Jersey barriers. Interstate manufactures barriers in several sizes at its location in Clarks Summit, Pa., north of Pittsburgh, and then either sells them or rents them to divert traffic and protect workers and pedestrians. Its customers are contractors, governments and oil and gas exploration companies.

Driving an XL 5100 III Gradall excavator out to the barrier installation site, rather than using a crane or a conventional excavator, completely eliminates the need for a lowboy trailer, said Jeff Columbo, whose family has owned Interstate since its founding in 1965. And on the jobsite, the Gradall makes a huge difference, he said. "The Gradall is 50 percent faster than a crane when we're moving and setting barriers," said Columbo. "We used to lay one mile a day with a crane, and now we can set a mile and a half using the Gradall." Working on State Route 29 in the village of Palm, where a bridge replacement project was under way, the Interstate crew was setting 200 feet of 42-inch barriers, each weighing 9,200 pounds. At each end of the line of barriers were several crash attenuators, each 25 feet in length and weighing about 2,500 pounds. Blocking off one lane of the two-lane bridge, barriers were set using chains as well as a barrier handling attachment. During the process, operator Joe Bernick repositioned the carrier from the operator cab, removing barriers and attenuators from a flatbed trailer and then moving up and down the length of the job site, aligning barriers from inside the job perimeter. Because of the Gradall excavator's short tail swing, one lane of traffic flow could continue on the bridge while the barriers were being placed. "I can typically unload and place 12 barriers in six minutes," said Bernick. "That's a lot faster than if I was using a crane, plus there's a lot less sway. And with this boom, I can place barriers under bridges and beneath overhead utilities. That's really good when I'm working at night and it's hard to see what's above." For the XL 5100 III with a highway speed undercarriage, able to travel at speeds up to 60 mph, the job site at Palm was a two-hour drive from the plant at Clark Summit. "I can get on the job a lot faster than if I was relying on a trailer to bring a machine to the job," said Bernick. The Gradall also is an important tool at the plant, where there's a need to manage the current inventory of barriers. "We have about 20 miles of barriers in stock, and we build about three miles more a year," said Columbo. The largest are 14 feet long and 50 inches high, while the smallest are 34 inches long and 12 inches high. "We used to use cranes for all of our work, but we find we can work much faster with Gradalls," he said. "That's a benefit to us and for our customers who are eager for us to finish our work so they can start their road and bridge construction jobs."